A Cultural Lesson on Time and Values

Years ago, when my family and I were living in Venda, at that time one of the so-called Bantu homelands within South Africa – an effort by the apartheid government to legitimate to the international community a “separate but equal” racial policy (that failed) – I was driving with an older Venda colleague to a meeting.  At some point he noticed my concern with our possible lateness because I kept looking at my wrist watch.  Seizing this teaching opportunity, he pointed at his own watch and said, “Scott, do you see this?  We only wear this for decoration.”  In other words, I was being politely  taught a cultural lesson – that from an African’s perspective, relationships are of more importance than punctuality and a fixation on schedules. 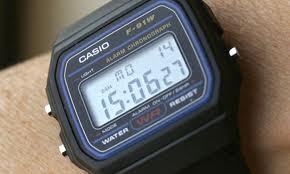 Filed under Culture and Africa

A Masai Warrior, A Roasted Corncob, and a Life Lesson

For some unknown reason, as I sat to write this FIRST EVER personal blog, a flurry of thoughts and images confronted me, each vying for primacy of expression.  I chose an image from early childhood – that of a tall, slim Masai warrior, standing just on the edge of my family’s camp fire, leaning against his long, double-edged spear, the sharp point of which was anchored firmly in the ground beside him, and with evident boredom or fascination – I could not tell which, observing and listening to an incomprehensible white American family’s interactions and conversations (*Note: the individual in the photograph below is only representative of my memory).  During these once or twice-a-year safari outings, my family had become accustomed to these semi-nomadic, fireside gawkers, who arrived almost on cue each day accompanied by their herds of cattle, irritating-to-your-face-and-ears flies, plus insatiable curiosities – for many of them: admiring their faces for the first time and at great length in the side mirrors of the camp’s resident Land Rover Defender. 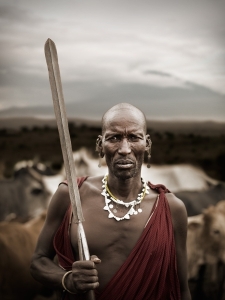 This image is seared in my consciousness, in part, because of what occurred between the warrior and myself – a small, insignificant incident, perhaps, yet full of meaning these many years later.  I must have been 8 or 9 years old at the time, 3rd or 4th grade.  I was eating a roasted ear of corn, while seated on a camp chair, within leg reach of the boundary-setting stones of our campfire. I had consumed at least half of the ear, if not two-thirds, when I become intensely conscious of the fact that we were eating, and this very visibly and culturally “different Other” persisted in standing, staring, and maybe, even, wanting some of what we were eating.  Painfully aware that my family and I were attempting to ignore him with the hope that he would grow bored and return to his cattle or family kraal or both, I eventually could not fight my discomfort any more, and got up from my chair, walked over and extended to the warrior my partially eaten ear of corn.

His response to my act of “generosity” unexpectedly and sharply drew deep embarrassment to my white face.  I don’t recall whether the warrior even took my gift, but for certain he did mutter something to himself in either Maa or Kiswahili, and then spat on the ground.  He was clearly offended and unhappy with his “gift.”  Surely he was upset by one or all of these reasons . . . I had already eaten the choicest kernels off the cob.  I offered him remnants of a measly corncob, when the rest of us were eating a meat, potatoes and all the trimmings kind of meal.  I didn’t invite him to sit in a chair around the fire with us.  And, I offered nothing to drink as an accompaniment.

What likely most offended this Masai warrior was not the pathetic “gift,” or the lack of invitation to join my family in our noontime meal, but rather my naively innocent yet demonstrated antagonistic attitude and perception toward difference.

This warrior was someone my culture had instilled in me was inferior, uneducated, “unsaved,” and primitive – all without ever having said as much in words (i.e., hegemony).  Winthrop Jordan, in White Over Black: American Attitudes Toward the Negro 1550-1812, noted that “difference” – and more importantly, perhaps – sustaining a sense of difference, is dependent upon isolation and/or segregation, whether sustained by voluntary or legislated means.  Or more blunt and to the point, as Andrew Sinclair noted in The Savage: A History of Misunderstanding, “The unknown is usually the enemy, while the misunderstood is always the savage.”

At that time I did not live isolated from “different others” because of a legislated segregated society like apartheid South Africa.  My individual isolation and that of my family’s was mostly voluntary, induced in part by education and economic privilege, plus post-colonial realities, but hardened by a rationality and practicality influenced in large measure by fear.  A fear of crime.  A fear of over-exposure to poverty and its effects upon the psyche of oneself or even one’s children. A constant unspoken fear and awareness, perhaps, that life is tenuous and unpredictable, and in the briefest moment of time good fortune and societal standing could be reversed.

So  . . . lesson learned and wisdom acquired from this life incident of more than 30 years ago?  A person doesn’t necessarily have to give up what one has inherited through privilege of birth, or acquired through individual hard work, or even to assume another person’s life and identity in order to experience empathy and thereby show relational kindness and respect for those different or less fortunate economically, than yourself.

BUT, I believe people – you, me, we – need to consciously and intentionally live measurably less isolated lives, and more relationally engaged on a day-to-day basis with our respective “different Others”, so that we can in varying measure, shape and form share collectively in life experiences.  This is not socialism, as many attempted to brand President Obama, but a healthy ism of societal relatedness.  And from shared life experiences and relational moments lie the seedbeds of new and transformative thoughts, relationships and paradigms, which can help mend our world’s many fissures.

My significant shared life experiences and relational moments with “different others” regrettably did not occur until postgraduate studies – much to my own self-impoverishment.  Up until my early to mid-30s I was quite confident that I was right and “the other” was wrong (especially the religious other).  It took a little dash of so-called “liberal education” and a big dash of a willingness to be vulnerable and risk my faith and traditional cultural/ideological thought in a much less homogenous and less power-presiding position, before I recognized and experienced first-hand just how small I had shaped God and the “Other,” and just how much I had projected “enemy” upon the “different Others” of the world.  What I’ve since discovered is that contrary to my Puritan-laden heritage, it is not sin that defines humanity, but rather a search for meaning amidst the inexplicable realities of life (miracle of birth, the problem of suffering and the enigma of death), hope and the aspirations for “becomingness.”  As my primary mentor used to tell each class of university students:  “You are not merely human beings.  You are human becomings!”  I wish I had been so wise that campfire day, so many years ago.  Maybe I would be emailing that Masai warrior as friend, requesting a proof read of this blog, and asking whether his recollection of that day and event is anything similar to my own.