Confessions of a (former) Killer and Gun Lover

Given the tension in the United States over gun rights and the prospect of tighter gun controls, I want to contribute a few thoughts on the subject myself.  I start with a confession.

I confess that I was a killer of African wildlife and I was a lover of guns (although the latter sounds a bit kinky as I write it).  Okay, so I’m not a former killer of people as my blog title might intimate at, and you’re disappointed in a sick-kind-of-way because that’s why you clicked on my blog. Please don’t disengage.  Read on. 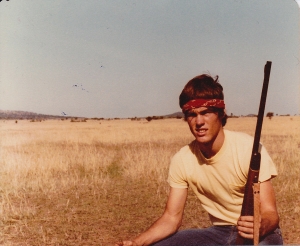 Yes, I thought I was quite the dude.

First, a preamble: This blog is not a diatribe against guns, gun ownership or hunting. I accept the arguable concepts of self and national protection, as well as conservation reasons for hunting or culling. Rather, I write as someone whose perspective on guns and hunting has changed, and this is my attempt to explain in part why.

I don’t recall ever choosing these twin interests.  I simply was born into a family and culture where owning guns, shooting guns, and hunting with guns was entertainment and identity.  It helped that once or twice a year guns and hunting resulted in a freezer filled with venison of wildebeest, impala, eland, hartebeest, warthog, yes, even the occasional zebra or cape buffalo. I admit I enjoyed going on several day “hunting safaris” in Kenya, Tanzania, and once in Botswana.

There’s something magical about camping out under the canopy of an African night sky, as Hemingway did, while nursing a cup of coffee, chai, or hot chocolate around a warm, crackling campfire – my family were teetotalers, therefore, regrettably I never knew the greater joy of nursing a glass of Cabernet Sauvignon until much later in life – listening to the nearby sounds of hyenas and jackals, and occasionally, a distant rhythmic chorus of lions (hear at http://www.youtube.com/watch?v=iC5vrt7eGG4), all while gazing up at the ga-trillion stars that mesmerized and enthralled your wonderment of life and being alive.

My family didn’t always go on safari just to kill.  Even on “non-kill” photographic safaris, however, hunting was ever-present on our minds.  We enjoyed wildlife viewing safaris to national parks, including Masai Mara, Amboseli, Samburu, Serengeti, The Ark, Treetops, Lake Nakuru, Ruaha, and Ngorongoro Crater. Although we exchanged rifles for cameras on these occasions, this did not stop the males among us from incessantly referencing this and that particular animal from a hunter’s eye.

“Wow, look at the horns on that impala!”  Or, “Wow, what I would give to have my rifle right now!” Or, “That Zebra stallion has dark, beautiful stripes – a lot nicer than the zebra I shot last year.”  Sometimes my siblings and I would so intensely want to shoot a prized trophy that we would act out a shot, positioning our left and right arms and hands outward toward an animal, as if holding a magnum calibre rifle, and then making a shot sound with our mouths, while simultaneously pulling on an imaginary trigger. Of course, on these “hunts” we always bagged our animal.

An elephant “shot” with camera at too close proximity.

This interest and love of hunting and firearms lasted longer than I care to admit.  And when guns no longer featured into my home inventory, they were temporarily replaced with a compound bow.  I transitioned to bows for two reasons.  Most importantly, I lost bi-lateral high-frequency hearing for a combination of likely reasons, one of which, were rifles exploding in close proximity to my unprotected ears.  Stupid, stupid, stupid! Secondly, once you master “the shot,” which I did, rifle hunting offered little pleasure other than “the stalk.”   The rush that comes from observing first-hand the skill of an expert tracker as he reads the telltale signs of animals and nature, and leads you ever closer to your intended quarry is the topic of many a-fireside-conversations. 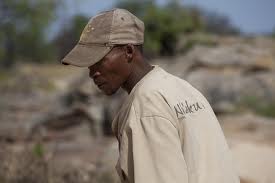 What changed my mind about firearms is difficult to articulate in words. Obviously there exist any similar number of “Newtown, Connecticut” type incidents to point at, yet those have all occurred at a safe and sterile distance from my own life, and despite the horrid, tragic, and senseless loss of life, including small children, they were not the effective change agent for me.

Although I could add as a caveat, that during my family’s residence in South Africa, we once counted up the number of friends and acquaintances we had known murdered and it came to about 20, and add to that almost 50 incidences of armed hijacking (I lost count after 40).  Yet even there, amidst what psychologists and social theorists define as “a culture of violence,” mindsets were mitigated because South African society absurdly yet understandably came to accept violence and crime as simply part of “the culture.”  After all, if you’re unable to stop or stem violence you still have to live with it.

For me, a change of mind and attitude toward guns and killing germinated during the summer of 2001.  That summer just prior to 9/11 was singularly formative in reshaping my worldview and identity, and, of course, post-9/11 only reinforced my sense of shared identity with people of the world, given that more than 90 countries lost citizens on that day.

As part of my postgraduate studies I had the fortune to attend summer/2001 seminars at Bossey Ecumenical Institute in Geneva, Switzerland. This studies-abroad experience was singularly transformative, in that, for the first time I was obligated to temporarily suspend my protective, American cultural identity bubble.  If I was to get anything out of the three weeks’ study, I had to place myself in the vulnerable and unsettling position of having to listen and vicariously experience life and faith through the shared experiences and perspectives of individuals, who I shared few life commonalities with.

A discussion about homosexuality and interpretation of holy scriptures arose one session, particularly over how subjective truth is, and how people are selective (pick and choose texts that best fit their interpretive and cultural lens) when it comes to contentious issues.  My mindset at the time was conservative, so both my thought and contribution was in effect to try to claim a high ground of “absolute scriptural authority” (*postmodernism posits that all truth is interpretive and provisional – I agree) and disregard or at least minimize the reality and day-to-day experience of those who of necessity have to live a daily branded life of being gay.

At some point in the discussion, America’s gun culture came into play.  A participant from India, about my age, heterosexual, and married shared something that struck a deep chord of change in me.  I take considerable liberty in recounting these twelve years later what exactly she said –

“Being tolerant or even advocating for homosexual rights is about perceiving God as ‘life-giving.’  Whatever is life giving or affirming of life is of God, because God is the ‘giver of life.'” She contrasted the “sin” of homosexuality with the “sin” of America’s penchant for guns, violent entertainment, and sometimes aggressive interventionist strategies abroad and posed this concluding thought: One affirms life and the other destroys life, therefore which one poses the greater societal ill and danger?

In November, during the period leading up to Thanksgiving, many, if not all North American Jain communities, hold all-night prayer vigils for the millions of turkeys that are slaughtered for our ritualistic feast day.  In case you know nothing about Jainism, it is an Indian religion, of which one of its underlying tenets of faith is “ahimsa” or “non-violence.” Gandhi’s non-violent means of protest took its inspiration from Jainism, and later Martin Luther King, Jr., as well as Nelson Mandela were inspired by Gandhi.  So there is some truth in saying that Jainism singularly sparked social revolutions on three separate continents and through three historically significant individuals.  When I shared the Jains’ prayer vigil for turkeys with my world religion classes each semester, I inevitably heard snickering.  To young identities shaped by a pioneering, minutemen and wilderness-subduing history, such as is the United States’, the idea of commiserating with birds to be slaughtered seems the utmost in absurdity.

Which is more out of kilter?  A near obsession by many with all things guns – gun shows, gun collections, gun rights, and guns themselves, of which the latter were the primary contributing factor in 8,600 of 12,700 total murders in 2011? Or an “absurd” valuing of life; one that advocates non-violence even to the point of holding all-night prayer vigils for turkeys?

You be the judge.

One response to “Confessions of a (former) Killer and Gun Lover”