The Devolution of Children’s Development | A Call for (healthy) Boredom

Women’s rights have rightfully progressed since the days and era when even cigarette brands, like Virginia Slims, based their marketing on a then male-dominant social context; popularizing the slogan, “You’ve Come a Long Way Baby.” 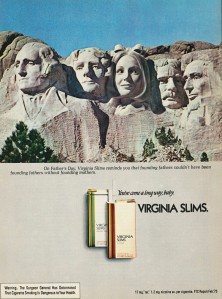 Regrettably, I don’t think we can unequivocally say the same about children’s developmental progress, particularly in terms of play and interpersonal.

Listen, I’m not suggesting kids are less intelligent today than previous periods. And, certainly, when looking back on history to periods in which “children were to be seen but not heard from,” they, like women, have attained many long-overdue rights and protections.

Rather, what I’m suggesting is this:

Today’s children (North American, at least) seldom experience what I call “healthy boredom”; a type and degree of inactivity that encourages and facilitates creative and imaginative play; voracious reading; friendships with heretofore unknown neighbors, and down time with siblings and parents that often evolves into reminiscing and unrestrained laughter.

Look, this isn’t a researched critique of 21st century life, such as, “technology’s effect on children” (although merely google that and you’ll find 1 million-plus links to expert perspectives on the subject, including “Antisocial Networking?,” “Wired Kids, Negligent Parents?,” or How Technology is Affecting the Way Children Think and Focus.“), but rather, a personal perspective based on a recent cursory trip down memory lane, and a “trip” through my iPhoto folder.

If you’ve read my “About” you know that I grew up in East Africa. That, plus my 40-ish age translates to a childhood void for the most part of typically American childhood experiences such as TV, Six Flags Over Texas and Wet-N-Wild type amusement parks, non-stop sporting events, plus, in the so-called Bible Belt, weekends and summers filled with church and mission activities/trips.

Most of my childhood consisted of post-colonial Kenya experiences. This included the typically European and tourist varieties, such as tented safari, but gratefully, a predominance of local activities with indigenous friends as well.

So, for instance, my recollections of childhood include:

*In Nyeri (near Mount Kenya), herding small herds (5 to 25 animals) of foraging cows, goats and sheep alongside Kikuyu boys. I remember being near-obsessed with the long sticks the herd boys used, and hoarding a stash of herding sticks. For this blog’s relevance: It was boredom that drove me out of my house and to our 1-acre property boundary, where I initiated contact and friendship with passerby herd boys.

*My four years in Kisumu, a town bordering Lake Victoria, were the most formative ones for me; especially in terms of how fun-filled a “boring” life could be.

I slingshotted and fished with nets for Tilapia alongside my Luo friends (see Fly Fishing for Sheep and Slingshotting for ‘Ndeges’). We frequently played “Cops and Robbers” with my assortment of toy cap guns. One group would hide and the other would count to 100. The “counters” then shouted in Luo “wathe?” (ready?), to which frequently came the reply “podi” (not yet!).

A favorite game my Luo friends taught me I’ll call “bottle cap car racing.” It cost and utilized nothing more than discarded bottle caps from glass soda/beer bottles. We each found and jealously guarded (sometimes trading) our own collection of Fanta Orange, Coke, Sprite and even Tusker beer bottle caps. We made them “road and race worthy” by eliminating any unsightly dents or bulges by gentle hammering, and then rubbing them vigorously against a coarse, sandpaper-like surface. This made them smooth, slippery, and crazy fast.

We created “race tracks” of curves, banks and bumps in our gravel driveway by means of placing two hands together – much as you might to create a silhouette butterfly impression on a white wall – placing them palm down on the gravel, and with bulldozer maneuver pushing them along and through the gravel, thereby forming a 6 to 8-inch wide bottle cap race track. The caps “raced” by flick of the fingers propulsion (middle finger flicking out and away from the thumb). Like any game, you incurred penalty. For example, if your bottle cap flew outside the race track, or you hit another racer.

Other remembered (and memorable) collective activities motivated by periods of “boredom” from this period of life include making wire rally cars, replete with battery-powered headlamps (flashlight bulbs), gear shifts, and rubberized steering wheels. 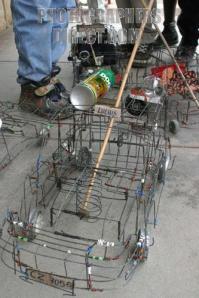 A wire car similar to those my friends and I made. Borrowed from arteilimitada2011.blogspot.com

Also, making a two-room, A-frame structure of sticks in my family’s backyard. Finding large stacks of field grass (aka, grass thatch), securing them tightly to our stick structure to prevent rain seepage, and then overnighted with my Luo friends in “our house.”

*During high school we lived in Musoma, Tanzania for one year. I have to admit, finding meaning in boredom in a small, out-of-the-way lakeside town was a real challenge. Nevertheless, a fond memory from this brief and boring residence was sitting outside on a quilt with my parents and younger brother (and 2 dogs), and looking up at the near pitch-black, yet star-studded night sky and searching for the many crisscrossing satellites.

My walk down “boring” memory lane road spontaneously occurred this past week, when I came across select pictures of my own children, likewise exhibiting “boring” life moments. So “boring” that there’s seldom a week that passes, in which one or all three of my younger kids say something like, “I miss (South) Africa! I wish we still lived there.” See the following photographic evidence of the deprived long-term effects of no TV, no iPad, no Nintendo, no non-stop activities et cetera – 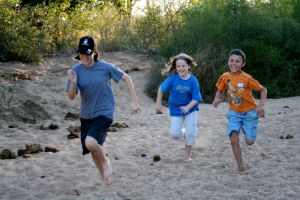 Foot race in a dry riverbed, alongside elephant dung! 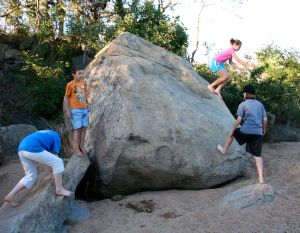 Playing “office” on a broken iMac consigned to the garage. 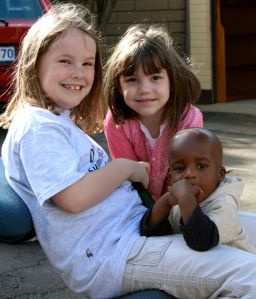 Did you ever imagine an office chair with wheels could be so fun?

Imaginative creation of a zoo in the “desert”

I wish for you and yours the pleasures and longterm benefits of “boredom”!