When it comes to a grandparent or great-grandparent, memories of person are inseparable from place.

My three younger daughters and I returned yesterday from a quick, 3-night trip to El Paso, where we visited “Bueli” (short for Abuelita), my wife’s mother. We never knew “Abuelo,” as he died of leukemia four years prior to my dating his only child (Whew! – not his death, obviously, but that I didn’t have to ask his permission).

A visit to Bueli generates a lot of excitement, which is a combination of cozy/fun memories, and of at least two forgettable ones: the drive distance required to reach her, and the cramped sleeping quarters for our family of 7 once we arrive (Bueli lives in a small, two-bedroom condominium near William Beaumont Medical Center).

Memories that rapid fire in the kids’ minds when they hear a trip to ELP is in the works, include:

-Evening roundtrip family walks to the Amphitheater in nearby McKelligon Canyon

-Pigging out at Cattleman’s Restaurant (as a younger man, I once ate a 32-ounce T-bone, which dangled off at both ends of the plate when the server brought it), and . . .

-A morning jaunt across Transmountain pass to shop, plus, of course, Starbucks’s coffee at Barnes & Noble adjacent to Sunland Park Mall. 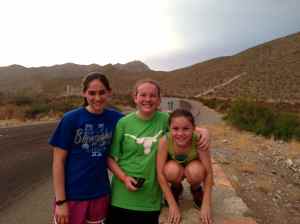 Recently I came across pictures (memories) of our first three years of marriage, which we spent living with my dad’s dad, “Daddy D” (DD), in Pleasant Grove, Dallas.  This came about during my first semester of Master’s studies because my grandmother (Mamaw) passed away.  Of Mamaw – she remembered her first encounter with an automobile.  One passed her family’s residence in Mississippi, whereupon she and her sister ran quickly out to the dirt road, placing their noses to the ground in an effort to catch whiff of the car’s rubber tires.

Since we were a financially strapped newlywed couple (like most) it was suggested that we live with DD and commute to school (50 miles). It would save us money, plus help stave off his certain-to-be loneliness. At the time he was 82. We were 22!

DD probably had a side to his character and person, which Ana and I might find unpleasant, but after three years living with him, we never discovered what it was. 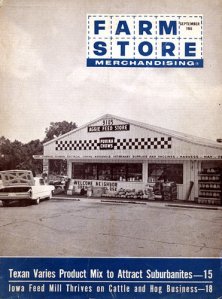 From 4th to 6th grade I kept a garden and raised broiler and hen chickens, which upon slaughter or collection of eggs, I sold to my only paying customers – my parents! Specific to DD, the only time in any family member’s recollection that he ever wrote a personal letter to anyone was to me!

I was always dreaming and drawing up plans on how I was going to be a big-time, rich chicken farmer, and in order to succeed, I needed to know current prices for chicks, feed, and supplies.  DD was the person I wrote to with my many questions, and he responded: listing the prices for a variety of different breed chickens, plus how much feed I’d need for X-number of chickens, et cetera.

DD was a simple (do not read stupid) elderly man, who was ever-so-softly always whistling, and had a habit of slightly rocking one or both arms back and forth when experiencing pleasant discomfort (e.g., when he was being light heartedly teased).

Every single day, at day’s end, he would sit in his tan-colored recliner, and while watching the likes of The Dukes of Hazzard, T.J. Hooker, or Adam-12, peel an apple or an orange, which he, of course, then ate.  He didn’t just peel the fruit, though. He peeled them so as to have long, thin streamers of peel or skin.

DD’s house was simple too.  Nothing fancy, just a 3-bedroom non-brick house on a large, maybe one acre plot.  Most of the backyard was “under garden” or tillage. He also had a green house, which at the age of 92 he climbed up on top of to replace the roof!

We grew everything from red potatoes to asparagus.  My poor, poor young bride learned quickly how to can tomatoes and sweet corn! One pleasant and painful memory I have of harvest time, was pulling up potatoes.  It was fun and like drilling for oil or water because you never knew what size or how many “taters” you were going to get. One problem, though, were fire ants, which liked to make their home among the potatoes, and feed on your burrowing and exposed hands. 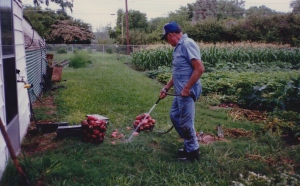 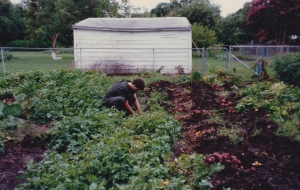 Me digging up potatoes 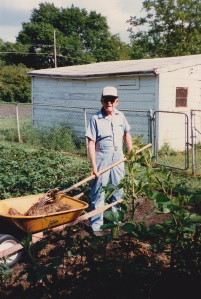 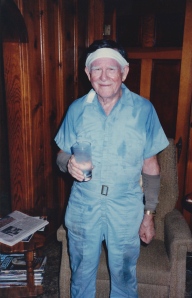 At the age of 83 DD decided it was time to take up golf and it was up to me to both coach and partner with him.  We would go out back together and hit plastic golf balls.  On at least two occasions we went to a nearby municipal golf course – memories for me of agonizingly slow-paced play and constantly spotting (because of his cataracts) and informing him where his golf ball went (usually a distance of no more than 50 to 75 yards, and always it seemed at a 90-degree angle to where he was walking:). Obviously his age and loss of agility prevented him from a full-rounded swing, so instead he would quickly hatchet the ball – taking both rigidly straight arms with club in hand backward about 4 feet, then swiftly pushing them forward, connecting with and shot-putting the ball forward. 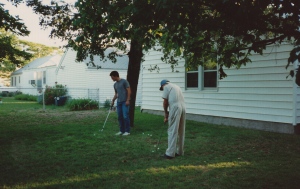 Our years with DD were special for many reasons, not least of which is that our first-born was born. I remember when Ana informed me she was pregnant.  I was watching TV with DD.  She came in from work at Parkland Hospital and stood in front of me (obstructing view of TV). Smiling, she extended her arm, handing me “the clue”: a baby rattle. I was very slow to catch-on!

Our final months with DD were good, but sad. We were soon leaving to work in South Africa. Once again he was confronted with singleness. At some point in time after he knew we were leaving, he began dating a much younger woman (59) from a nearby Baptist church. DD was informed by his conservative pastor that he would not agree to DD continuing his long-held deaconship responsibilities, in that, his wife-to-be was a divorcee! This budding romance was alarming to DD’s children as well, because after all, surely this much younger woman couldn’t actually be in love with an 86-year-old, and must be out for his money (not that a feed store hourly wage employee would have generated much cash reserves).

So . . . guess who was called upon to “counsel” and hopefully show my granddad the error of his ways?!  You got it! I was too young at the time to refuse both pastor and family request. I remember the night I went in to DD’s bedroom, where he was seated in relative darkness in his dark green bedroom recliner. I don’t recall what I said or how I spoke, but I do remember what DD said and did. Tears rolled down his cheeks and he quietly stated, “Scott, I just don’t want to be lonely!”

Thankfully DD didn’t listen to his detractors and went ahead and married this much younger woman.  They remained married (happily, I think) for 12 years, until DD’s death at 98.

My wife and I will always remember the man and the house at 3322 Pleasant Drive, Dallas, Texas.