I’m seldom a willing, let alone enthusiastic viewer of animated children/family movies. This, in contrast to a former South African friend of mine, who not only has a special tolerance for watching the latest kids’ movies, but also a knack as a minister of a small faith congregation for crafting clever, individualized marriage messages using themes and characters from the movies for soon-to-be married couples.

I have one exception, however. Madagascar. I laugh every viewing at the wit and humor of its colorful and animated characters, especially, of course, narcissistic King Julien, whose self-admiration is equal to Phoebe and Monica’s old friend and fake Brit, Amanda Buffamonteezi, in the 2003 Friends’ episode, “The One With Ross’s Tan,” in which, reuniting after years of having not seen each other, she tells her two friends to, “Look at me! Look how young I look.”

Flipping channels two nights ago, as men stereotypically do, I hit on a rerun of Madagascar, in particular, the section where Alex (Ben Stiller, aka the lion) is alienated from his friends on the beach. It’s night, and feeling a desperation to escape the confining “wilds” of the island for the bright lights and accustomed comforts of mainland New York City, Alex erects a huge HELP beacon from the trunks of coconut trees.  He intended to set it alight immediately upon sighting of a rescue ship on the horizon.

Unfortunately for Alex, a storm brews, and lighting strikes, incinerating his help beacon, but not before the camera captures his emotional state of mind and life predicament.  That is, the in-flame “HELP” transforms by videography editing into a flaming message of “HELL.”

If my sense of observation is even in the ballpark of proximity, then there are more people than is comfortable to be aware of, whose lives right this moment are teetering on a paper’s edge between desperate unvoiced pleas for help, and life or work circumstances and relationships typified as hellish versus happy.

A case and area in point: My wife’s an advanced practice nurse, specializing in palliative care. Palliative implies “relieving pain” or “relieving symptoms,” and while it isn’t synonymous with death and dying, it frequently manages patients who are nearing the end of life’s journey.

This past week she learned the potency (defined as: “the power of something to affect the mind or body”) of touch combined with words as a “tool” of compassion and healing.

It’s a given that every palliative patient’s family has, is and will journey through an excruciatingly difficult period of life struggle. Emotional struggle, certainly (as in a spouse or child grieving the gradual yet persistent decline of their loved one’s physical health), but for many patients, the emotional is exacerbated by distracting lesser–but by no means little–stressors such as interfamily conflict (i.e., current spouse contending with former spouse, children and relatives over estate or end of life directives), creditors, impending repossessors, anxieties over the impending loss of a family’s primary income earner, et cetera.

Each family member affected by the chronic illness of a loved one struggles, no, agonizes over making the best life and death decisions she or he can under stressful circumstances, and obviously less than best choices are frequently made.

What my wife learned last week is how meaningful a touch on a shoulder, and a few acknowledging and affirming words to a struggling family member can be–“You’re doing a great job!” or “You’re doing so well given your family’s difficult circumstances!” or “I can’t imagine how painful this must be for you.”

Struggle is not the apropos time to offer personal opinion/counsel or critique, unless, of course, the one struggling point-blank asks for your input, which, even then, is seldom a request for you to solve their problems as it is a plea for you to recognize and acknowledge their situation, their struggle, their pain.

Eyes fill and shimmer with a rapid onset of tears, which until your kind gestures lie just below the surface of emotional struggle. Glistening eyes are voiceless expressions of gratitude that you bothered to take notice of their life and situation–“You can’t imagine how difficult it has been! But thank you for acknowledging and affirming my personal struggle and that of my family.”

From my perspective there exists an alarming incidence of walking wounded, at least in the United States, and I’m not even referring to the hundreds of thousands of war veterans suffering from post traumatic stress disorder. People’s deep and “multiple woundedness” becomes horrifically evident for the entire world to see during moments of crazed acts of mass violence, but is no less present on “average days,” and in quieter, less visible ways and places.

As Harvard’s Diana Eck instructed her fellow Americans to “Open your eyes and look around you,” this, regarding the changed and rapidly changing cultural and religious landscape of the United States, so too, all of us need to open our eyes and look at the telltale signs of the many who share our life and work spaces, and who are living yet struggling on the brink of Help and Hell.

The immensity of social, mental health and emotional need often evokes donor or benevolent fatigue and a mindset of “What can I possibly do that will make any positive, let alone lasting difference?”

This week the world is commemorating and eulogizing one ordinary at birth, yet extraordinary human becoming and African man in the person of Nelson Mandela. Let our lives be his continued legacy. Don’t minimize or discount the potency and power of one! One kind word, one sacrificial act, one compassionate touch, one shared tear, one hour of shared conversation . . . 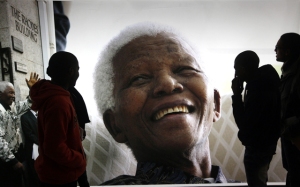