The Poor Don’t Deserve To Own Cell Phones

At a neighborhood block Christmas party two senior citizen gentlemen and I were chatting over hors d’oeuvres when the topic turned to local indigents.

A recent fire destroyed a childcare center less than three blocks from our homes. Between our houses and the former center lies a sliver of an eco green belt, in which several halfway houses lie tucked hidden from view, their occupants mostly people of color. One of the two seniors spoke of seeing a young black teenager walking through the green belt, which abuts his own property, reading a newspaper’s comic section, then crumpling and discarding each finished page onto the ground.

Since our discussion began on the topic of today’s high incidence of young people bereft of responsible adults in their lives, I assumed his comment would be sympathetic and supportive of these many children’s plight. Instead, this on-the-surface very kind, amiable, elderly gentleman’s “compassionate concern” entailed calling out to this young African-American boy, and informing him that if he sees him discard his paper trash one more time he would call the police and have him arrested.

This comment prompted the other senior to likewise comment on what he found socially disturbing: “Have you seen the panhandlers with their hand scrawled cardboard placards asking for handouts at the intersection of X-Road and Highway-Z?” “Yes,” I replied. He proceeded, “The other day I saw one of them asking for money while talking on a cell phone! Well! He lost whatever sympathy he might have received from me!” 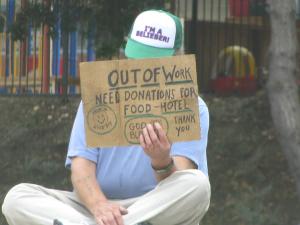 Let me try by rephrasing to understand the message unspoken yet central to these two gentlemen’s perspectives, because it is so prevalent and similar-to-identical with so many privileged people’s perspective. . . .

If you’re needy, destitute, hard up, in a word penniless, and, you’re relying on or asking for financial assistance from others, including government, then you should not, nor do you deserve to own or make use of any item or service that might be perceived by those socially, politically and economically privileged to be “luxury” or “non-essential?”

On the surface this type of reasoning seems, well, reasonable.

For instance, during my “poorer by degree” (PhD) study days, my family survived on a small graduate studies’ stipend, plus, a $1,000/month gift from a radiologist friend and his wife. During this four-year, self-inflicted academic sojourn, while my kids’ friends all had cable TV, we opted not to, primarily because of how such a “luxury item” might be perceived by our benefactors.

A disturbing hypocritical incongruity lies behind or at the root of these two elderly, white mens’ mindsets, as well as many socially and economically privileged people.

That is: Privileged individuals, particularly segments of my own North America, have few qualms in denigrating and chastising the poor for their misuse of resources or welfare assistance, yet give no self-thought to the privileged freedom of choice they have in determining what to spend their excess monies and privileges on.

Although it would be prudent of the needy not to use a cell phone while simultaneously holding out a hand or holding up a sign asking for money, it would be equally smart for the well-to-do not to disparage or judge the poor, while simultaneously and hypocritically demonstrating environmental and social justice insensitivities by their misuse or paltry sharing of excess prosperity and privilege.

Which is a greater travesty of socioeconomic place, privilege and resources?

A panhandler with a mobile phone, with which s/he might call 911 to save someone’s life, or perhaps, simply keep in touch with a family member concerned for their well-being, or a moderate to wealthy individual’s pursuit and purchase of items unquestionably “excess” or “privileged” in a world of escalating socioeconomic inequities?

Given such unconscious two-facedness, even duplicity, no wonder two-time Pulitzer Prize winning op-ed columnist for The New York Times, Nicholas Kristof, in his fourth of five thought pieces on “When Whites Just Don’t Get It,” stated the following–“One element of white privilege today is obliviousness to privilege, including a blithe disregard of the way past subjugation shapes present disadvantage.”

Obliviousness to privilege, and an ignorance or disregard for the past, aka social history’s persistent stifling and subjugating effect on marginalized peoples, are predominately a white (WASP) malaise, the result of isolationism.

Isolationism typically refers to political and international matters, as in: “a nation’s policy of remaining apart from the affairs or interests of other groups, especially the political affairs of other countries.”

I use the term to refer to individuals, even entire groups or classes of people, who live such isolated, even segregated apart-heid type daily lives, that they seldom, if ever, have interest, reason or requirement to experience, let alone understand life from the perspective of the struggling, stereotyped or simply “different Other.”

This de facto isolation of each nation’s privileged from the majority of its citizens’ daily and real life (lived) experience, results in an unconscionable obliviousness to privilege, which, in turn, more often than not results in insensitive and paternalistic attitudes, statements, even political and market policy decisions that exacerbate those, whose lives are already defined by a mere struggle to survive.